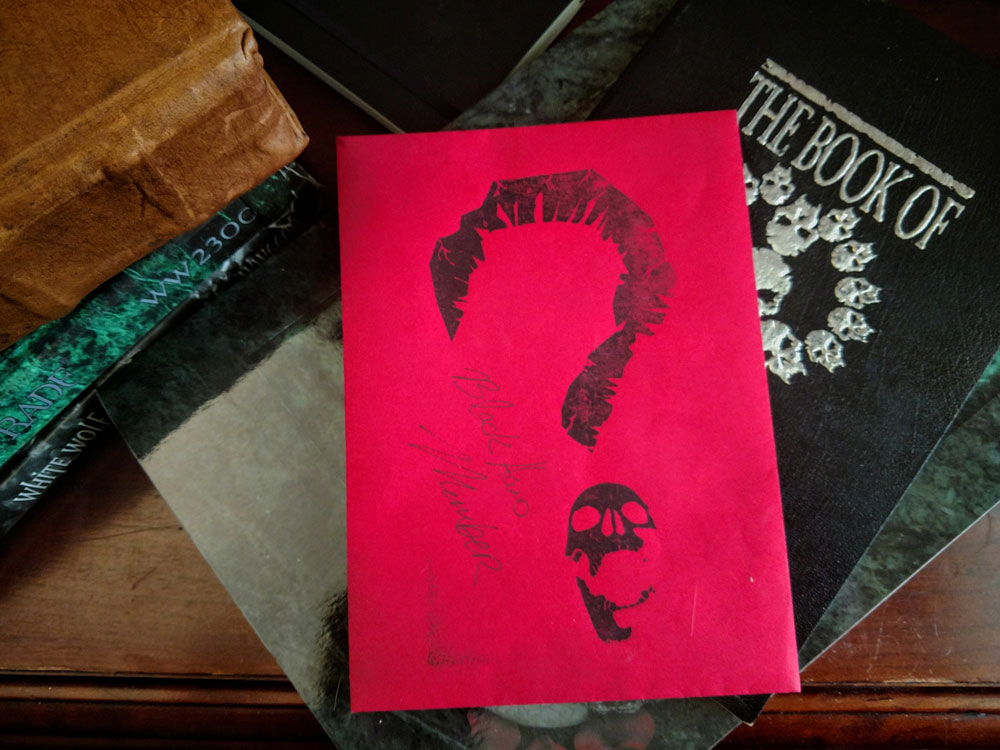 To make it easier to pay for the Night In Question, we offer an installment plan where you pay a little less than half to reserve a ticket. The remaining amount is due by midnight on July 1st.

If you want to take advantage of this plan, sales for installment tickets cuts off this week, midnight on May 31st.

If you have already bought an installment ticket and wish to pay the remaining amount, click here to make your payment. 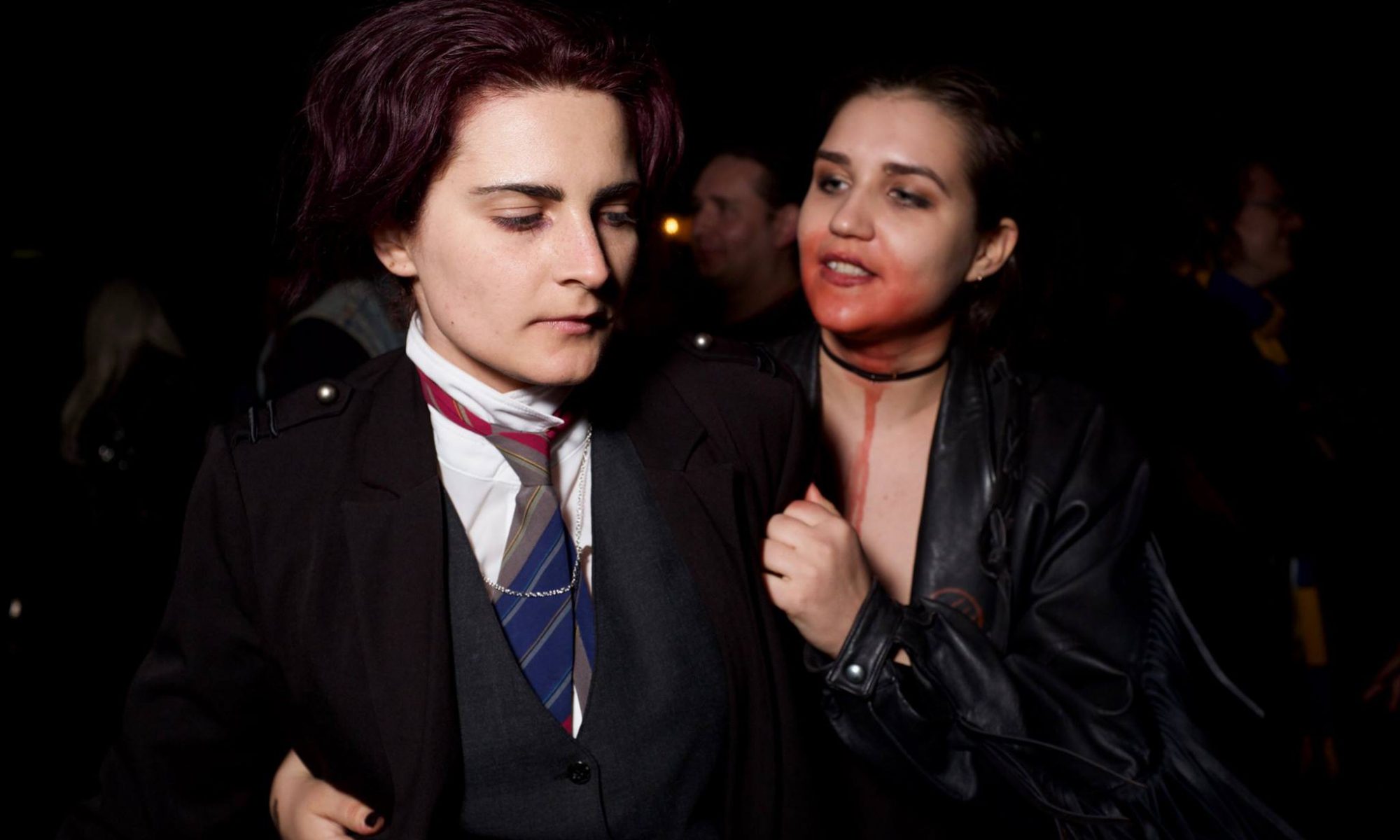 Coming from the Nordic and freeform traditions, The Night in Question‘s playstyle is called bespoke. But what does that mean, and how different is it from traditional Vampire: The Masquerade LARPs?

The Meaning of Bespoke

Bespoke can mean two things – something made specifically to an individual’s tastes and requirements; and showing something through appearance and action. The bespoke style embraces both of these definitions –

Bespoke games emphasize the control of each player over their experience. Nothing happens to your character without consent – but you are encouraged to take hold of the game and play in interesting engaging ways, since if you cannot truly lose, there’s nothing to be gained constantly by winning.

Bespoke players set out to immerse and embody the action of the game. At all times, the game and the players attempt to appear as the thing they are trying to be. Physical contact, stage-fighting, in-depth props and immersive environments are all in the mix. But the idea above takes precedence over all – the bespoke game provides the tools for physical roleplay and intense contact, but does not require it and requires negotiation at all times for it.

Bespoke games write rules tailored to the experience intended. Rules are written to focus on the intent of the game. Everything is up for grabs, including limiting player actions, setting explicit acts or having different zones that emphasize different styles of play.

Wait, I thought this a Nordic game?

Kind of. One of the ongoing problems with the term “Nordic” that even its adherents will tell you is… it can mean many things. Nordic can be everything from high fantasy immersive weekend campouts with latex weapons to playing in an empty darkened room in street clothes.

The bespoke term was invented by our partners Participation Design Agency when they set out to describe the style of Enlightenment in Blood and other similar games they created; and they came out of the Nordic style of play. We’re continuing to use it and are introducing it to the American audience here.

Consent and Collaboration are King

Traditional parlor LARP focuses on conflict-based roleplay and mechanics. In challenges between players or when facing obstacles, systems are used to determine who is victorious. Success and control of the scene is determined by having a character who has the appropriate abilities and the right luck. In parlor LARP, you can win things. You win a game of rock-paper-scissors. You win a challenge. You win a position.

The bespoke style is different. In a single night, players are collaborating to make the most engaging enriched environment and story possible. You have unprecedented control over what can be done to your character compared to traditional games. But you will soon learn that saying no to everything is not much of a victory. Bespoke style games emphasize playing toward the most interesting result – even a self-destructive end for your character.

In The Night in Question, you are free to declare yourself the one who always gets away from the snarling monsters, but where does that leave you?

Bespoke intentionally takes the joy of victory out of ‘winning’ – the real winning in the bespoke game is to have an awesome story that you will tell for years afterwards and to push your limits as a person, while feeling safe doing so.

One of the important rules of this collaborative style is that it must not pressure people into doing things they might not want to do.

You are never required and never encouraged to take a step or do something you as a player are not comfortable with or consent to – period, no exceptions. No mechanic, no power, no story line trumps your physical and emotional comfort, and anyone in the game who pushes otherwise will be warned then removed.

The safety workshops before the event; the safety team during game; and the culture of safety we are building at Jackalope are all working toward protecting people from this kind of pressure and helping people feel comfortable at games. Without that environment, the level of physical role-play and immersion we are aiming for would not be possible or advisable.

Safety and collaboration do not blunt our games, but allow us to go boldy into the dark.

American LARP often emphasizes plot and story progression. The bespoke style is focused on creating a powerful compact immersive experience. Emotional development and conflict are the order of the day; and there are often no overarching secrets to discover or plot to piece together.

In The Night In Question, we expect you to explore the World of Darkness around you, to express and experience the horror of this place we’ve created. But we have no plot arc we expect be fulfilled. The events of the game are a framework for creating a rich experience together, not a challenge presented to you as a group to overcome or figure out.

Bespoke LARPs are not sandboxes where any character can be created. Characters and groups are pre-written as part of a game’s plot and set-up, then assigned to players. So it is important not to have strong preconceptions about what you will play. Be open to all sorts of experiences when you go into a bespoke game – and remember the writers have done their best to make every character engaging and complete – and most importantly, ready to hit the ground running.

The writers of a bespoke LARP like The Night In Question write powder kegs ready to explode. The situation is going to infused with drama and conflicts ready to go off, bad choices to be made and bad things ready to happen. This is part of the point – we have six hours to have an incredible experience, and it’s important for everyone to hit the ground running.

With our Larpweaver system, you will be guided into creating a character by a combination of pre-written content and your own play style. The pre-written material is there to inspire your own spin on the character, not dictate every last detail.

Expanding On Your Character

Your assigned character will have premade ties to other groups and characters, along with an outline of their personality and their starting position in the game. But this is not the limit of what you can do! You are encouraged to reach out to other players, make new connections, come up with more back story and find new hooks that will make the night more intense for you and others.

Once you have your character, reach out on social media, start conversations, reveal secrets, make plans and set yourself up to have one hell of a night. We can’t promise any of these plans will survive, but we can promise they’ll be the basis of a great night to come.

One of the things we  can gain from emphasizing consent and doing workshops is that we can afford a physical style of role-play that is much more immersive than your average game. Physical interaction is encouraged in the play space between consenting and enthusiastic players who negotiate them. While American parlor LARP has strong taboos against personal contact, the bespoke style uses an ongoing conversation of consent and safety to make physical contact possible.

Want to be romantic in character? You tell each other what you are comfortable with, even if it is just touching each others’ shoulders or holding hands; or goes as far as actual kissing. Or just declining completely to be touched, which is always an option. There are limits on sensual and physical contact, for sanity reasons and to keep everyone else at the event is comfortable and consenting to the experience.

Want to have a fight? You can negotiate playing it out using the skills you learned in the workshop that empowered you to do so safely and with consent. If you prefer, you can narrate it, or simply be chased off into the darkness followed by a scream. But you can also become part of the atmosphere and have the experience of playing out being attacked within your limits and the game’s safety guidelines.

With all physical contact, consent can be revoked at any time and must be respected absolutely. It is always optional.

Bespoke-style games break the rules of classic Mind’s Eye Theatre games, because they are encouraging a different experience.  While secrets and powers are an emphasis for those games, bespoke games move in the direction of sharing things out of character, metagaming and encouraging your character to fail.

We want you to communicate out of character with other players, telling them your character’s secrets, weaknesses and motivations. Meta-gaming is not considered negative. Use it  to drive character development and push for emotional intensity.

Compared to a normal Vampire: The Masquerade game, the vampires and other supernaturals of The Night In Question have a very limited and simple power set.

And none of them can be used to trump consent or safety.

All violence is negotiated out and must be consented to. Players must consent to what happens to their character through violence.

Violence, brawls, fights, monomacy duels – these are meant to be dramatic moments to play out physically after negotiation, not dealt with through mechanics. Prop weapons are not involved in any calculation of strength but rather are tools and props for telling the story of that encounter, though you may decide together that one side wins because of the weapon they have.

Try to embrace losing as much as winning violent struggles, and use those moments to develop your story. And since you can only die with your consent, fights can heighten the action without ending your evening – unless you feel that your character should die and their story has come to an end.

And if your character dies in The Night In Question, the World of Darkness is a place where death is not necessarily the end…

Bespoke LARPs are different than Mind’s Eye Theatre LARPs, but we love both. The bespoke style creates a very different experience to create different ways of exploring the World of Darkness together.

There’s a lot to process here. You might have questions about how negotiation works, how The Night In Question is structured, and all these questions will be available to be answered in the next series of design posts.

Check out our new trailer for the Night In Question, filmed on the actual game site outside of Austin, Texas!